Andy Ash is an educator, musician, visual artist, and, most recently, a mural artist. He joined us by a wall in early September to paint ‘All The Colours’. Sandwiched between AME72’s ‘Lenny’, and Angry Dan’s ‘Cantankerous Man’, Andy Ash set about creating one of the most vibrant and cheerful additions to our street art trail. In the time he was here, we were keen to sit down and talk to him about his work. Have a read, below.

You’re a musician, as well as a visual artist. Does the visual culture of music: the album art, vinyl sleeves, influence you? 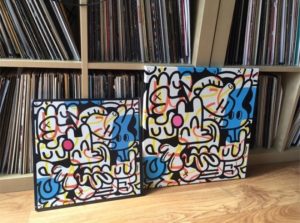 Recently, I saw you were getting your kids involved with your drawing. Were you tapping into youthful creativity?

Yeah. I think, in a lot of what I do, I still have the mind of a child – this kind of weird child-adult mind. So in a lot of my work, I’m tapping into a lot of kids’ artwork. Things like Mister Men, children’s books, I remember there was an illustrator… I can’t remember his name, but I remember the books from when I was a kid. These weird characters that, when you look at them as an adult, you think ‘how did someone come up with the idea of this strange character?’ I’ve always loved stuff like that. And with my kids, I’ve always tried to encourage them to think creatively about that. 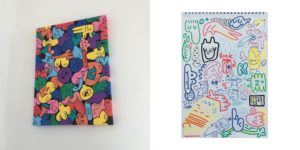 Did you draw a lot as a child?

Yeah. I don’t think I was ever considered as good at drawing- I did an art GCSE, I think I got a C or something. I was never traditionally good, but I drew doodles out of everything, then I got into graffiti. Not typical graffiti. I was interested in weird characters painted on street corners, and that oddball stuff really appealed to me.

Did you start on walls, as a professional artist, or was it canvases first?

To start with, it was literally anything I could get my hands on. And I still do that. If I see a nice piece of wood in a skip, I’ll take that and paint on it, or old bits of cardboard… – Once I could afford canvases, then it was canvases. So, actually, painting on big walls is not something I’ve done much of at all.  When I was younger I’d do doodles on bits of paper, and paste them up on the wall, but, no. 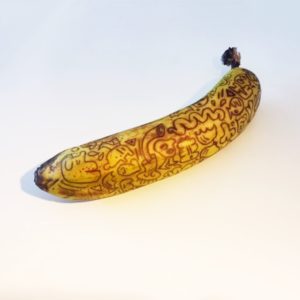 Is there anything on the easel at the moment?

Yeah. Im working on a series of images at the moment, called ‘All the colours’,  just because I’m using so many colours on them- bit like the mural I’m doing today, actually- but, the one which I think will finish off the set, is at home half finished.

Often it’s a ‘I wonder what would happen if I do this, and try and use as many colours as I could.’ That’s how it started, and then I just carried on developing the series. 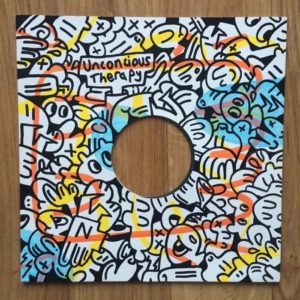 Your work is almost always fun and cheerful, at least on the surface. Do you ever produce any artwork that is dour?

It’s funny- well, the simple answer is probably no. I think my work is a lot of fun, but underneath it all, there’s probably a whole mixture of emotions. So, although they are always fun little characters, they’re not always happy. So, I suppose it can just be down to how people see it. But, no, I’ve kept it pretty happy, I think.

Do you have any advice for an artist who isn’t finding fun in their work?

The best advice I could give is ‘don’t do what you think other people want you to do, do what you want to do.’ because it’s quite easy to fall into the trap of ‘people like it when I do this’, or ‘this is popular so I’m gonna try and do this.’ But that stops it being fun. That turns it into work- for me, at least, anyway.

Similarly, you’ve got to experiment and think outside the box. Got to not be worried about messing something up.

There have maybe been a small handful of times where I’ve thought ‘oh, I’ve got to do this’ and it’s felt like work, but that tends to be the other side of things, for instance, when I’ve done record covers, once I’ve done the design or the painting, there’s all the other stuff like digitising it, making sure it’s ready to go to the printers, that feels like work. The actual painting, though, is enjoyable.

With my paintings, they’re always very spontaneous, so if I don’t want to do them, they won’t turn out very well.